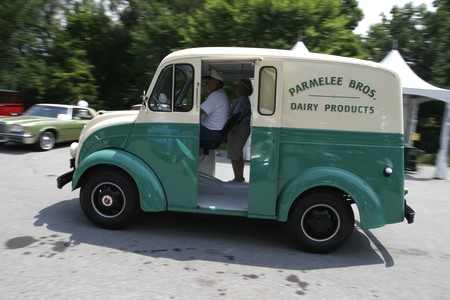 A snippet from the beginning of my milkman story; on a more fantastical world than I usually write. Darrius is a 1950’s milkman, snatched from his early morning route into another world with his milk truck. Here they’re telling him why they took him.

“Darrius, my people want a country of freedom. We don’t want to assert slavery over others.”

“In my world there’re a lot of people who would take advantage of a power like yours.”

“Yes, we’ve heard legends of your world. You must be all great warriors.”

“I hope that’s not why you sent for me,” he cautioned. “I’m just an ordinary man. I’m no warrior.”

“Of course! That’s what we wanted!”

“I don’t understand. What could I do for you? Why am I here?”

“Because of the legend!”

“Here is the legend,” said Ojorno, and he leaned back and quoted.

When the Jacarunda and the Prowess unite,

When they bring the Diminutive to light,

Comes from the land of distant sight,

When these four combine to do,

When their hearts are to one task true,

When they allow each one to contribute their due,

They cannot fail to bring the message through.”

Ojorno had a fine, theatrical voice. He seemed very proud of what he’d just said, and the other two were staring at Darrius and nodding their heads. They seemed to expect him to be impressed.

“Don’t you get it, man!” stormed Ojorno.

“Get what? That’s just a verse. You have a war to fight, don’t you? Why don’t you join some rebellion, or…”

“Darrius, try to understand. We are the rebellion.”